You are here: Home / Dog Training / How do Invisible Dog Fences Work?

How do Invisible Dog Fences Work?

Here is a guest post written by Paul Glovers who lives with his wife and husky in Washington state and is a freelance writer for Veterinary Assistant Schools, a guide to Vet Assistant careers and education… 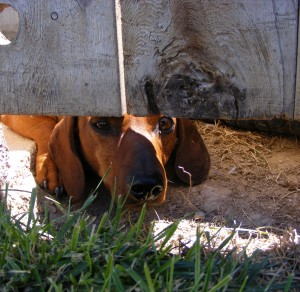 Dogs enjoy playing outside just as much as their owners enjoy watching them. However, some dogs can get into trouble very quickly. Just a few steps out of the safety zone can lead a beloved pet into a heap of danger. A driver might hit the dog if it runs out into the road. The dog might also get lost or cause trouble in the neighborhood. So much can occur outside the confines of the home yard. For that reason, many owners are turning to invisible fences for protection. Manufacturers created invisible fences with pet safety and owner comfort in mind.

Invisible fences are containment systems that installers put into the ground instead of above the ground. The boundaries are similar, but neither the dog nor the neighbors can see them. Invisible dog fences are electronic units that have a transmitter and a receiver. The installers set the boundaries around the yard. When the dog attempts to cross the boundaries, the transmitter sends uncomfortable static signals to the dog’s leash, which is the receiver. In order for invisible electric fences to work properly, the owner must train his or her pet to understand the concept of crossing boundaries.

Invisible fences provide several benefits to the animal and the pet owner. For one, manufactures designed these units in such a way that there are no yard view obstructions. Homeowners can enjoy a clear view of their yard s and the surrounding areas. Traditional above ground fences obstruct the back yard view.
Invisible fences are also less costly than traditional fences and provide more protection. Dogs are very intelligent pets. Some of them learn how to dig underneath fences. Other dogs can learn to jump and climb. The electrical system prevents the pet from thinking of creative ways to get out. Owners also have more options as far as design. For example, if an owner would like to keep his or her pet from getting into a garden area, the installers can create an underground shield around that area in addition to blocking off the main yard. It is much simpler than attempting to build a separate fence around a small garden. Additionally, a homeowner with several acres of land might not be able to afford placing fencing around the entire area. He or she can place boundaries in a smaller area of the yard by using an invisible fence. That way the dog is still confined, but he or she has enough space to roam around and be happy. The homeowner is still able to view his or her yard without obstructions. Traditional fences do not offer that type of flexibility. Are Invisible Fences Humane?

Some consumers are concerned with whether invisible fences are effective. They also wonder if using this type of shock device is humane. Invisible fences are very safe for the animals. They do not cause excruciating amounts of pain, nor should they be psychologically damaging to the pet. However, owners should not use them on very young dogs or dogs with severe health issues. Young dogs may not understand this training procedure. Unhealthy dogs could be frightened and have an adverse reaction. Studies have shown that invisible fences used with proper training are very effective and non-dangerous training methods.

The success rate for invisible fences is very high. These fences will work for almost any dog. However, there is always a rare case here and there. These few cases of failure are usually due to improper education and training rather than technology flaws. Owners should read the material and watch any disks provided by the manufacturer before attempting to use the equipment on the dog.

Invisible fences range in price according to the manufacturer and the type of transmitter the unit has. The pricing also includes the design of the product, the size of the yard, and the installer’s charges. The cost of having an invisible system put in could be as low as several hundred dollars to as high as several thousand dollars. The best thing for a homeowner do is to shop around. It is important that the individual purchase high quality products to avoid failure. It is better to pay slightly more for a peace of mind.