You are here: Home / Dog Health / Rusty’s Bad Day At The Park

Rusty’s Bad Day At The Park

Last Tuesday my husband and I took our two pups out for a walk at the local dog park. The dog park has a small lake (more like a mud puddle really), which also doubles as a place for kids to fish. We left the truck and began hiking the path that meanders along the base of the hillside and then loops down around the lake. This little walk takes about thirty minutes and amounts to about one mile.

The walk was going great; Our dogs were happily running through the tall grass looking for abandoned tennis balls while my husband and I strolled along the path. We turned toward the lake and began our walk around it and as usual the dogs leaped into the murky water to cool off and ensure the attention of a bath that evening.

We were about ¼ of the way around when my husband stopped and said, “Oh no!” He strode over to Rusty and opened Rustys mouth. That’s when I also noticed the fishing line emerging from the corner of my beloved dog’s mouth.

“We need to go,” my husband said, “There’s a fishing hook in the back of his mouth.”

Tense with concern, I didn’t argue, and we quickly began retracing our steps back towards our truck. We’d started our walk after normal business hours and of course, at this time our regular vet was closed. I quickly used my Droid to get the phone number for the local emergency veterinarian. The receptionist informed me it would be a minimum charge of $85 just to look at Rusty. Like the hook in Rusty’s mouth, I felt a bitter sting at the sudden knowledge of how costly the carelessly discarded fish hook would be. I let her know to expect us in thirty minutes and hung up the phone.

As we walked, I kept a close eye on Rusty. He wasn’t giving any outward signs of pain, but I could tell the hook was bothering him. In frustration over the object piercing the tender skin at the back of his throat, he chewed at the line in his mouth and periodically shook his head.

As we approached the parking lot, I noticed a large group of people and dogs arriving for their evening walk. We immediately called Rusty and Sadie over and had them heel beside us. The group contained around four dogs that were behaving very erratically, barking and running around excitedly as their owners completely ignored them. One particular dog, a medium-sized white bulldog of an unknown breed was wearing a lime-green backpack. The bulldog was attacking every dog in the immediate area, biting, fighting, and body-slamming every dog it saw. In what seemed like a split second the bulldog bit Rusty. They fought for a moment, mostly Rusty was trying to get away. The fight ended with the ill-mannered bulldog running off in pursuit of its next victim.

Already feeling very protective of my injured dog, this unprovoked attack made me furious. Especially since the dog’s owner was calling for his dog to come, but didn’t seem very concerned over his pet’s behavior. His animal clearly needed to be on a leash until it could be properly socialized. I wanted to give the bulldog’s owner a piece of my mind, but we still needed to get Rusty to the vet. I diverted my attention back to the truck and loading Rusty and Sadie into it.

Since we were clueless as to how long we would be at the vet, and because it was on the way, we decided to drop Sadie off at home before taking Rusty in. We pulled into the garage and opened the back of the truck. I told Rusty to stay, but perhaps he knew what he was in for, because he chose not to listen and quickly followed Sadie inside the house. It turned out that Rusty’s momentary lapse in obedience was a good thing, otherwise we might not have noticed the blood.

The crimson blood drops were a sharp contrast against the pale-oak laminate floor in our house. At first I thought they were from Rusty’s mouth, but when my husband went to open Rusty’s mouth again. My husband’s hand found a sticky wet spot on Rusty’s left flank and came away with blood staining his fingers. The bulldog with the lime-green backpack had left his mark.

Moments later, the receptionist working at the Emergency Veterinarian Clinic buzzed us through the door. We were given some quick paperwork to complete and hustled into a room to wait for the veterinarian. A few minutes later, Cynthia Delany, DVM came in to perform Rusty’s initial assessment. I immediately liked Doctor Delany’s demeanor with Rusty. She was very gentle, kind and petted him throughout the examination, which helped make my traumatized pooch and I feel at ease. 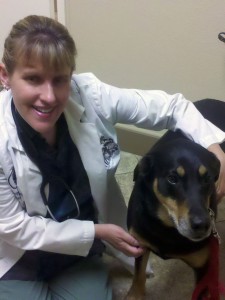 After the initial assessment, we were given an estimate of the cost for the work to be performed. The estimated cost of the work needed to patch up poor Rusty would be over $450. Why so much? Well, since the fishhook was inside Rusty’s mouth he would need to be anesthetized prior to it’s removal. Doctor Delany said she would clean and examine the bite on his side during this time. I was concerned about the risks posed by the anesthesia, but knew in this case it couldn’t be avoided. We gave our permission and signed the estimate.

The vet tech started by giving Rusty a shot in his butt. The shot contained a drug to help relax him prior to fixing him with the IV required for his surgery. After the calming drug had taken effect, they gently led a now muzzled Rusty into the back to start removing the fishhook. They told us it would take Doctor Delany thirty minutes to finish, so we decided to return home and feed Sadie.

When we returned to the Emergency Veterinarian Clinic, we paid the bill and listened as they explained Rusty’s discharge instructions to us. Because the fishhook was dirty and the injury was located in his mouth Rusty was prescribed antibiotics and given an anti-inflammatory to reduce the swelling. The wound on his side required cleaning and four staples. Poor Rusty!

We carefully transported our very dazed and confused pup back home. My little guy was completely out of it, and he periodically needed to stop and lean against the wall to avoid falling down. All this because one negligent person was too lazy to be bothered with properly disposing of their fishhook and left it where it could be stepped on, or eaten by an unsuspecting animal.