You are here: Home / Dog Advice / Walking Your Dog

Often the New Year inspires us to make a resolution that usually gets ignored by February. My personal favorite 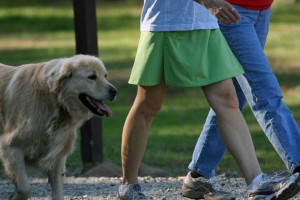 promise is to include more exercise in my daily schedule. I always start out with the best of intentions then before I know it, my willpower fails, my priorities change and somehow my resolution to get healthier expires. One year, I even bought an expensive gym membership, that I never used. Sound familiar? If not – good for you. If so – you’re not alone. In 2008, the U.S. Department of Labor reported that only 16 percent of Americans ages 15 and older exercise at all on an average day!

Take a moment and look back at that U.S. Department of Labor statistic again. The numbers are deceiving in their presentation. It really says that 85 percent of Americans over the age of fifteen don’t exercise. Most people know they should exercise regularly. The benefits are well-known and include: reducing the risk of breast cancer, heart disease, diabetes and colon cancer risk to name a few. Plus exercising will make you feel happier and healthier. So why don’t we do it?

It’s almost like we all need our own personal trainers. A companion who can encourage us to get off the couch and get moving. Someone always ready to go, never complaining, willing to provide a social support network and motivate us to maintain a program. Celebrities pay a fortune for this type of star treatment, but you don’t have to. All you need is to unleash (or maybe leash) the power of your dog. If you are interested in exercise to help lose excess weight, studies have shown dog walking will help. Let’s face it, it’s tough to say no to those big puppy eyes and how excited they become when they think it’s time to go for an outing.

Dog ownership and obesity were evaluated in Seattle, Wash., and Baltimore, Md., in a study published in the journal Preventive Medicine in September 2008. Dog owners who reported walking their dogs were almost 25 percent less likely to be obese than people without dogs. Researchers in the April 2008 issue of Health Promotion Journal of Australia reported that having a dog in the house reduced the risk of childhood obesity by half! Studies have also shown having a dog in the house can reduce the likelihood of a child having allergies.

Here’s how the magic works in my house: Everyday Sadie and Rusty know they will be going for a walk. They’ve come to love and expect these daily one-hour expeditions and bounce, prance, and ogle me until I succumb to their less-than-subtle hints. If I even walk near the door, they both stare at me with the saddest puppy look they can muster and guilt me into taking them out. It’s their stalwart consistency and expert ability to dish out guilt-trips that makes my furry dynamic duo such remarkable personal trainers. Even a best friend will sometimes skip out on a workout session, but my pooches will never say they are too busy.

So then is taking your dog for a walk going to make any difference for you? I would say it depends on what your goals are. But the evidence shows that animals are a great way to help us de-stress from our regular life. Why not take a little time each day to enjoy walking your dog, it just might help you to live a longer healthier life.

How often do your walk your dog?